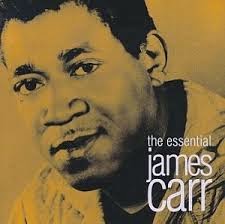 It's the final installment of Southern Soul Sunday and obviously that means that the artist to feature is the mighty and peerless James Carr the man with the finest voice in Soul.
I'm not sure if compilation records count when considering the top 10 albums of all time but if the do The Essential James Carr from 1995 on Razor & Tie would be there or there abouts.

The two songs I have selected were both singles on Quinton Claunch's Goldwax label from 1966.
Firstly we have the O.B.McClinton (no relation to Delbert I think) song You've Got My Mind Messed Up - Goldwax single 302 releases on 16th April 1966 and peaking at 7 in the R&B chart and 63 in the pop chart of the Billboard Top 100.
We then move to 29th October and the release of Pouring Water on a Drowning Man (Goldwax 311) written by D Baker & D McCormick peaking at 23 in the R&B and number 85 in the pop chart.
Unbelievably the greatest soul song of all time the previously featured Forgetting You was only the B side of this single

The series has come to a natural end as I was beginning to struggle for material and was fretting over whether songs and artists were Southern Soul or not.
However I still intend to continue with a Sunday Soul series without getting hung up on sub genres.

James Carr - You've Got My Mind Messed Up