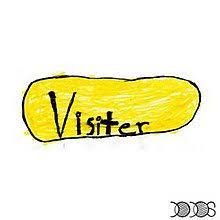 I would say that the CDs that the Swede kindly gave me in Edinburgh in June fall almost equally into three categories - keepers, one's going to charity and one's where the jury is still out.

Visiter the second album by the Dodos from 2008 on the Frenchkiss label falls firmly into the latter camp.Their music is a stripped down set up of just acoustic guitar and percussion. Sometimes it works and sometimes it doesn't.

A couple of quotes from the Amazon reviews where it is generally well received:

an air of live spontaneity, a rawness and volatility emphasised by crazed backing vocals yelped from the back of the mix. The style stretches a little thin over the course of 14 tracks; momentum is notably lost on more throwaway efforts and inconsequential one minute doodles.

In short something a bit different. One which probably merits a couple of further listen to determine its fate. These two were the ones which caught my attention first time round.

Thanks again Swede for your generosity

The Dodos - Red and Purple