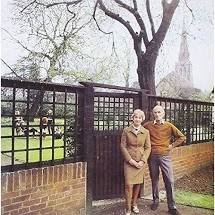 A week or so ago George forwarded me an article from the Guardian on Beeswing an autobiography by Richard Thompson with a number of references to Fairport Convention. It looks like a good read and has been added to the list.

Even more kindly he then forwarded me a copy of Unhalfbricking the band's 3rd album from 1969 on Island. It's the first time I've heard it in its entirity. I was familiar with about half the tracks as they feature on The History of Fairport Convention an anthology  which was the only album of theirs I had, along with a couple from Sandy Denny.

One of the songs I hadn't previously heard was Autopsy which is very good indeed. Not quite as good as Who Knows Where The Time Goes voted, quite rightly , as the greatest Folk song of all time. It has featured here before and no doubt it will do so again.

That's Folk been on these pages for two successive Mondays - a potential series in the making?

Fairport Convention - Who Knows Where The Time Goes?