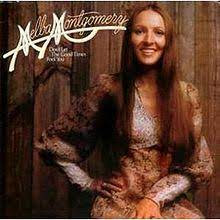 With great difficulty is the obvious answer. However needs must so for two weeks only we have the return of Vintage Country Vinyl featuring the kind of stuff that might have been at home in Val's collection.

Don't Let the Good Times Fool You on Elektra  is from 1975 and was Melba Montgomery's 14th album. The title track reached the top 15 but the other singles from the album didn't trouble the scorers.

In addition to her sole work Melba recorded a number of duets with George Jones and later Charlie Louvin. I'm pleased to say that she is still with us at the grand age of 82.

It is pretty much country by numbers.Not bad, but not that good. My copy was initially £3.25 but was reduced to 99p. Not sure that I would have stretched to the original price but worth a punt at 99p.

An altogether better offering next Sunday.

Melba Montgomery - I'll Be Your Lady