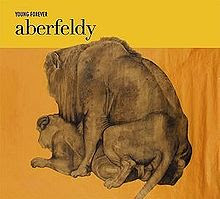 I hope that didn't put you off your breakfast.

On the back of me featuring  2006's Do Whatever Turns You On  the second album by Edinburgh band Aberfeldy a few years back JC very kindly furnished me with a copy of their 2004 debut Young Forever on the Routh Trade label.

Back then I described them as delivering pleasant indie pop in a Belle and Sebastianesque sort of a way.I think that I would now include the words slightly more twee somewhere within that description.

They reached the outer echelons of the UK singles charts with Heliopolis by Night reaching 66 and Love is an Arrow 60.The other singles Vegetarian Restaurant and Summer's Gone failed to chart.

The b-side of Love is an Arrow was called Tom Weir. It is not on the album Tom Weir was  a Scottish climber and broadcaster who did a TV series called Weir's Way.

There is a statue of him but it is in Balmaha on the eastern shore of Loch Lomond as opposed to the lovely Perthshire town of Aberfeldy. 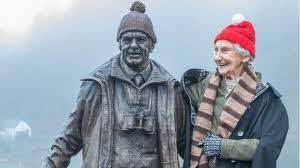 Aberfeldy - Love is an Arrow