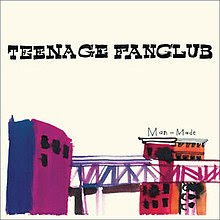 I'm expecting my copy of Endless Arcade the new album by Teenage Fanclub to turn up any day now. It will be the first of theirs that I have bought on release.

I've currently  got pretty much nothing after Songs from Northern Britain although I did pick up Words of Wisdom and Hope the one they did with Jad Fair in a charity shop.

I've also got a burn of the one pictured above 2006's Man- Made on their own PeMa label in Europe and Merge in the States.

I've just given it a listen for the first time in ages and whilst it is not in the same league as SFNB (very few albums are) it is not bad at all. Indeed as the Guardian would have it it's a difficult record to dislike

Recorded in Chicago with John McEntire of Tortoise as producer. Norman Blake recalls that they took so few instruments with them that they had to borrow a guitar from Jeff Tweedy..When in Chicago ..

Teenage Fanclub - It's All in My Mind