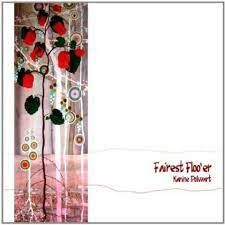 We are continuing with Folk Monday for a bit.Folk Friday would be more alliterative but by the time Friday comes around I usually opt for something a bit more bouncy.

Karine Polwart is a firm favourite of the CCM household and has graced these pages on  number of occasions although I think today's post of her singing traditional Scottish folk music may well be a first.

It is perhaps not that much of  a surprise given that she comes from a folk background having started out in folk bands such as Malinky and the Battlefield Band as well as participating in a Songs of Robert Burns project.

It may though come as a surprise (it did to me) to find out that Fairest Floo'er an album from 2007 was not her debut solo album but rather her third having being preceded by 2004's Faultlines and 2006's Scribbled in Chalk.

There is a pub called The Learig on Alexandra Parade in the east end of Glasgow a few hundred yards from where I had a flat in Cumbernauld Road where I had a flat for a number of years (known as the Ice Station). I was only ever in it twice; once when I stayed there when it was rough as houses and once before the Dundee United v St Johnstone Cup Final at Parkhead when it was very friendly.