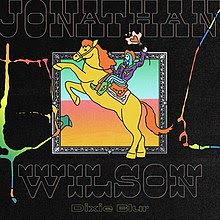 Singer/songwriter and producer and all round polymath Jonathan Wilson is widely attributed as resurrecting the Laurel Canyon sound.

To quote the blurb on his Bandcamp page Jonathan Wilson was born in the mid-'70s, but his music most clearly recalls an era whose heyday came a few years before he came into the world; the deep but gentle vibe of his songs is an echo of the Laurel Canyon mellow rock scene of the late '60s and early '70s, and it's no surprise that he found a home in the very same section of California years after the fact.

His most recent album 2020's Dixie Blur on the Bella Union label continues in this vein. Americana UK describe him as a modern musical renaissance man and describe the album as a really surprising treat.Recorderd in Nashville ,following a sugggestion by Steve Earle, it is co-produced by Wilco member Pat Sansone.A country focussed band was brought together, complete with pedal steel, with thr album being produced following 6 days of live recording in Cowboy Jack Clement's old studio. Hence the album name.

That's enough blurb.Time for some music.