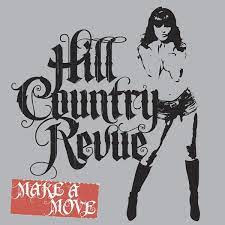 We are doing a fair bit of genre jumping this week. Monday was folk music and Tuesday Americana.

Hill Country Revue were a side project of Cody Dickinson (vocals/guitar)  and Chris Chew (bass) from the North Mississippi Allstars. They are joined by Daniel Coburn (vocals/harmonica), Kirk Smithheat (guitar) and Edward Cleveland (Drums)

The third member of the North Mississippi Allstars Luther Dickinson makes a guest appearance as do Aaron Julison, Duwayne Burnside and Garry Burnside with most of the songs , including those featured below, being written by Garry.

So two of Jim Dickinson's boys are involved aling with two off R.L. Burnside's. That's quite a pedigree.

From 2009 on the Razor & Tie label Make a Move was followed in 2010 by Zebra Ranch on the same label and that appears to be your lot.