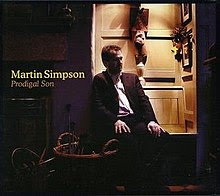 Some traditional folk music to start your week.

I first came across Martin Simpson with a live version of his brilliant song Never Any Good appearing on a sampler from Proper Records called That's Proper Folk. It made such an impression that it featured on my 3rd ever post back in December 2012. A song written about his relationship with his father.If this doesn't move you best check to see if you still have a pulse.

I've since picked up two or three of his albums including  2007's Prodigal Son (on the Topic label) on which the song first featured.It quite rightly won the Best Original Song Award at the BBC Radio 2 Folk Awards in 2008.Oh, and the album won too. You will probably recognise Kate Rusby on backing vocals.