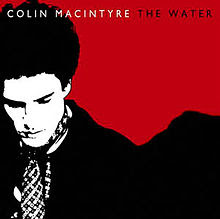 The Water a 2008 album by Colin MacIntyre made it onto the CD player over the weekend. It is his fourth album with the first three having appeared under the guise of Mull Historical Society. I've the album Us by MHS plus a couple of CD singles so they have graced these pages before. Today is the first time he's appeared using his own moniker.There have been a further 4 albums one his own name and then 3 by MDS the last being 2018's Wakelines.

I've previously described his music as pleasant melodic pop music which is easy on the ear and this album does nothing to change that. Clash Magazine gave The Water 6 out of 10. I would go a point higher.

JC, The Vinyl Villain, has some issues with Mr MacInyre as detailed here. Had I witnessed that I might not have been so generous with my additional point.

Colin MacIntyre -You're a Star

Colin MacIntyre - Famous For Being Famous