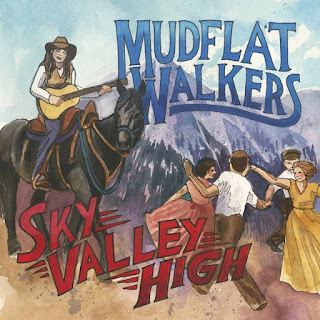 Mudflat Walkers are a band who came to my attention via George. He does the work so we don't  have to

Mudflat Walkers were a country/folk band based in the Skagit Valley in Washington State, comprised of Matney Cook on guitar and vocals, Kevin Olney on bass, and Jeff Lacy on drums and backing vocals. They released the EP FEELS LIKE HOME (OGS-006) in 2013 and their debut full-length SKY VALLEY HIGH (OGS-007) in 2014. Both records saw a rerelease on OGS Records in 2020

The vocals of Matney Cook remind me of someone but I can't quite put my finger on it. Zoe Muth maybe or even Jesse Sykes or perhaps a less polished Laura Cantrell? Any thoughts

I'll own up to having only given Sky Valley High a cursory listen so far - so much music, so little time. I have the feeling though that it could well become a grower over time.

If you have a similar feeling pop over to  Bandcamp where you can pick up  both the records detailed above for a reasonable price.

Mudflat Walkers - All I Want