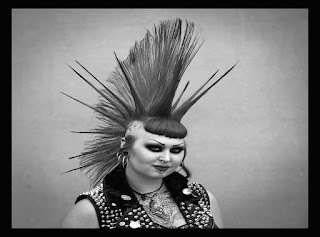 I have three CD burns called imaginatively Punk 1, Punk 2 and Punk 3. From memory these are 3 discs from a  compilation but I cant remember what one .

CD I starts with 3 splendid  songs which are not exactly punk but which probably could be described as roots of punk namely White Light, White Heat by the Velvet Underground, Kick Out the Jams by MC5 and Search and Destroy by Iggy & the Stooges. Does that ring any bells with anyone?

Kilburn & the High Roads were a pub rock band as opposed to punk but had Ian Dury in their midst which probably merits their selection.

The Damned were definately punk. Indeed they may well have been the first punk band. When I featured Love Song from The Sound of the City I ventured that New Rose was a better song. Here's the proof.

Chinese Rocks is a  song which was written by Dee Dee Ramone and Richard Hell and both were in bands which recorded it, the band Johnny Thunders & the Heartbreakers of which Hell was a member getting in first.

We finish off with the Punk Poet himself Dr John Cooper Clarke with a  pleasant ode to cyclists.