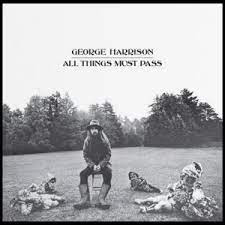 It's the penultimate week of Val's Vinyl and it is the pièce de résistance as far as Mrs CC is concerned.

From 1970 it is the original triple album box version of  All Things Must Pass by George Harrison on the Apple label. It is in remarkably good condtion given that it has been lying in Val's attic for a few years with no major issues as far as the records are concerned.

It would get me a few bob on Discogs but that would also get me divorced. My Sweet Lord is obviously the best known song on the album but given that it is Mrs CC's favourite it has appeared here before. Instead I have gone for two with Dylan connections.I'd Have You Anytime was co-written with the Bobster. My second selection is a cover of Dylan's If Not For You a song from his 1970 album New Morning and a love song to his then wife Sarah.

All Things Must Pass becomes the third triple album on the shelves joining Sandinista and Urk a live album by Dutch band Nits. I've no idea how the latter ended up there and don't recall ever having listened to it.

It's the final countdown next week.

George Harrison - I'd Have You Anytime

George Harrison - If Not For You