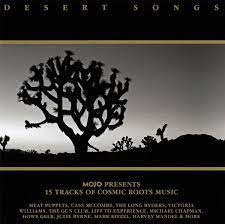 I've swopped over listening chairs in the Music Room. Gone is the bulky old green leather armchair to be replaced by a lighter and more manoeuvrable red one.

One of the advantages is that it is easier to move around and allows easier access to the bottom shelves of the Americana section which contain a number of compilations some of which are from Mojo.

Desert Songs from April 2017 features 15 tracks of Cosmic Roots Music and appears to have been issued to coincide with the 30th anniversary of U2'S Joshua Tree. Therefore I assume it is a charity job as I can't imagine  that I would have bought the accompanying magazine if this was the top story. I also can't remember having listened to it before but I think that I must have. It certainly has not  featured here before.

Julie Byrne is anew name to me. She is from Buffalo, New York and this song is from the second of the two albums she has released namely Not Even Happiness on the Basin Rock label.

Devon Sproule is a name that I am familiar with but don't have any of her albums by. I have the odd track probably courtesy of Ernie Goggins who I know if a fan..Tree Detail comes from her 9th and seemingly latest album 2017's The Gold String on Tin Angel.

I actually have a Gun Club album their brilliant 1981 debut Fire of Love. Mother of Earth (as opposed to Mother of God!) comes from a Cooking Vinyl re-ssue of their 2nd album Miami

Julie Byrne -All The Land Glimmered Beneath

The Gun Club - Mother of Earth