That Summer! Side A 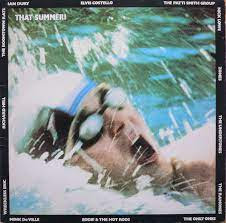 After the minimum of persuasion I'm continuing my Saturday New Wave Compilation series with an absolute cracker.

That Summer! is a 1979 soundtrack album from the film of the same name. The film by all accounts is an absolute shocker.Fortunately I have not seen it but it seems to be as bad as the music is good.

I had a copy of the soundtrack which I played to death and was subsequently went missing. Jamie very kindly stepped in and provided my with a copy. When I featured this before it was well received especially by Brian who is even more passionate about it that I am.

Enough of that - to the music. Same rules apply. Only artists and/or songs who have neved graced these pages  before will feature. This time around it is a two parter - side A and side B

This series is proving useful  for spotlighted songs by Ian Dury & the Blockheads which I have been criminally negligent in ignoring before.The opening track Sex & Drugs & Rock'n'Roll  deserves to have featured before.

The Zones, along with Mink De Ville , were probably the least well known act on the album . A Scottish band formed from the remnants of PVC2 after Midge Ure left to join the Rich Kids with Glen Matlock. They make their debut here with New Life.The split up shortly thereafter with members going on to join Endgames and the Skids.

We finish today with one of the greatest songs of all time. You will be suprised that I have never featured it before. Well I have sort of with the Peel Session version. Better late than never

Side B next week

The Only Ones - Another Girl, Another Planet