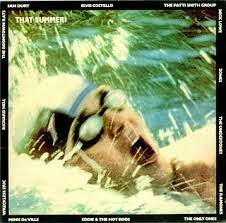 There has been much  recent discussion on this and other blogs as to the merits of That Summer! a 1979 compilation from the movie of the same name
Brian is on record as saying that it was a cornerstone of his musical education.He has a point there. It should be a compulsory part of the national curriculum and be played in every school in the land.
Even if you were to tie me to a radiator and subject me to non-stop Phil Collins music I would be hard pressed to come up with a better compilation.
When I previously mentioned that I no longer had my copy For Malcontents Only very kindly obliged by forwarding me the tracks.
After all, he is the man who has actually seen the film having been working in Torquay (where the film was set) when it came out.You will be glad to know that it features three loutish Scottish youths who have some confrontations with Steve (played by Ray Winstone) and then frame him for a robbery at a chemist shop.
All 16 songs are absolute essential must haves and I am sure that most of you have a reasonable number of them in your collection.
These are the two which my mind has always conjured up over the years whenever I think of this record.