Is There a Doctor in the House 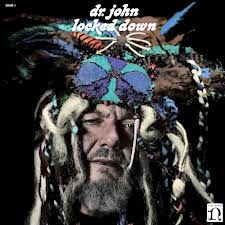 The  final of  the Auchterarder purchases is Locked Down by Dr John from 2012 on the Nonesuch label.
It is his Rick Rubin album except that it is not the bearded one behind the controls but rather Dan Auerbach of Black Keys Fame
Malcolm John "Mac" Rebennack is a New Orleans institution and has been on the go since the 50's.
I must admit I thought he was no longer with us so I was pleasantly surprised when he popped up on the recent excellent Reginald D Hunter's Songs of the South series on the BBC.
Apparently Locked Down is an exercise  in and a deep expression of the fading, almost lost art of tricknology - I thought as much.
The Zulu King of New Orleans.