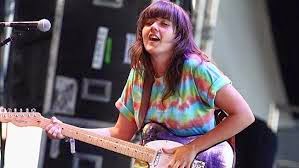 Australia's Courtney Barnett has just released her debut album Sometimes I Sit and Think and Sometimes I Just Sit.
I figure this gives me an opportunity to plug some of her earlier work which I suspect that many of you will already be familiar with.
Indeed Avant Gardener has already become a modern classic with just short of  a million and a quarter hits on You Tube


It is taken from her EP How to Carve a Carrot into a Rose which together with another  EP  I've Got a Friend Called Emily Ferris  were released together on a 2013 CD  A Sea of Split Peas.
But then again you knew that.
Here's a track that namechecks another great Australian band


And as an added bonus here is a soundcloud song from another Australian Larissa Tandy albeit one who alternates her time between Melbourne and Vancouver in Canada.