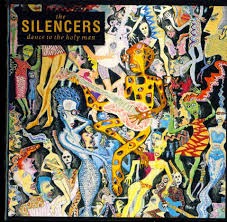 One of my purchases on my recent foray to Paisley to see the What Presence exhibition was The Silencers third album from 1991 Dance to The Holy Man.
There was no front cover just a picture of the band who for this album consisted of Jimme O'Neill, Cha Burns, Davy Crichton, Tony Soave, Lewis Rankine and JJ Gilmour.
Whoever handed it in obviously prefered the artwork to the music!
Founded in the late 80's by O'Neill and Burns who were in the post punk band Fingerprintz.
I thought that they had a national profile but comments from a previous post suggest that it was only really in the West of Scotland that they enjoyed a degree of prominence. Hardly surprising given that they hail from deepest darkest Lanarkshire
They also enjoyed a considerable cult following in France
They are still on the go having enjoyed various line ups over the years with only Jimme O'Neill from the line up above still playing with them today

The Silencers - One Inch of Heaven

The Silencers - I Want You
Posted by Charity Chic at 08:00