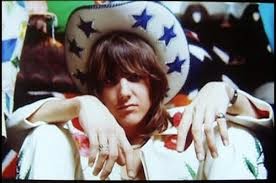 I was playing Grievous Angel by Gram Parsons the other day when it dawned on me that he had yet to feature on CCM - time to rectify that anomaly
He never quite made it to the 27 club dying as he did a couple of months short of his 27th birthday.
He did however pack a lot of fine music into his short life as a member of The Byrds and The Flying Burritto Brothers as well as his two great solo albums GP from 1972 and Grievous Angel from 1973 not forgetting his involvement and influence on Exile on Main Street.
Solo albums may be a misnomer as they would not be  the same without the seamless harmonies with Emmylou Harris.
Emmylou has dueted with many fine singers (a possible series there?) but nothing ever came close to the telepathic understanding she had with Gram.
Listen and weep.