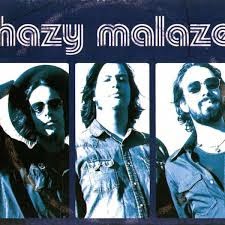 Bluesy power pop combo Hazy Malaze also appeared on yesterday's featured Greetings from Fargo CD.
I briefly thought about including them but after due consideration I felt that they merited a post in their own right.
Some of you will be familiar with singer and guitarist Neal Casal either as a solo artist or as a guitarist in Lucinda William's band.
In Hazy Malaze he is joined by Dan Fadel on drums and stuff and Jeff Hill on bass.
Their 2003 debut album from which these tracks were taken was recorded and mixed at Village Recorders in Los Angeles in eleven days.
Up until now I thought this was their only album being blissfully unaware of 2004's Blackout Love and 2009's Connections.
So many records, so little money!