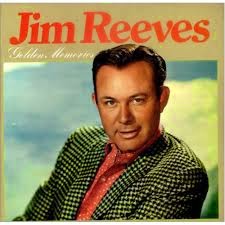 If there is a stack of vinyl in a charity shop it is a physical impossibility that it does not contain at least one Jim Reeves album.
Most are absolute twaddle - cheap and nasty compilations cashing in on his untimely death in July 1964 following a plane crash.Like so many artists who have passed on early he has sold far more records dead than alive.Seemingly, his widow Mary was down the middle of a lot of this keeping the industry going
Not so the two albums from which these songs are taken from He'll Have to Go from 1960 and Gentleman Jim from 1963  were recorded prior to his death and  my copies are the RCA Victor originals in fantastic condition picked up for a pound a piece in a St Andrew's charity shop. They unlike much of which followed are quality records.

He was a pretty unlucky guy in that he only turned to singing when a leg injury put pay to his baseball career.
And just to set the record straight he is not Vic Reeves dad!

Jim Reeves - He'll Have To Go

Jim Reeves - I Love You Because
Posted by Charity Chic at 08:00