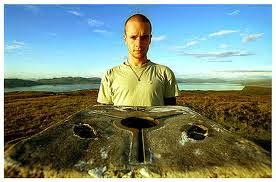 I watched the televised performance of this year's Celtic Connections concert of Martyn Bennett's  last studio album Grit recorded in 2003 prior to his death from cancer in 2005 at the tragically young age of 33.
It was pretty good.
However, what totally blew me away was a repeat of the Artworks documentary on the making of the album which preceded this.
Featuring Martyn, Michael Marra and Sheila Stewart of Rattray a traveller who sings on the album - all three sadly no longer with us.
I had ordered the album within ten minutes of the programme finishing.
It is a truly astonishing mixture of traditional Scottish music and songs from the travelling community mixed with contemporary dance sounds
This post from Martyn's webpage gives some more detail as to the making of the album

The first song Move features Sheila Stewart and  extracts from a Euan MacColl song Moving on Song. The second Blackbird features Lizzie Higgins on vocals
I am no fan of dance or techno music and this record is quite unlike any other record I possess. It is,however, quite magnificent.
Buy it!