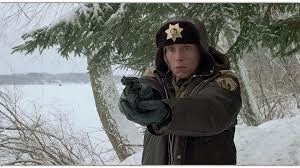 Greetings from Fargo.
No, not the largest city on North Dakota (population 113,658) and the county seat of Cass County.
Nor the fantastic 1996 film of the same name by the Coen Brothers.

No, the Fargo in question is actually a record label albeit one that does not originate from North Dakota but rather from Paris, France
Another great European record label (alongside Germany's Blue Rose and Glitterhouse and the Dutch Munich Records) which specialises in Americana music.
The two artists featured have graced the pages of CCM before.
Paula Frazer the erstwhile lead singer of Tarnation would I suspect not be out of place in a Coen Brother's film.
I'm sure that they could also find some suitable parts for Canada's Great Lake Swimmers.