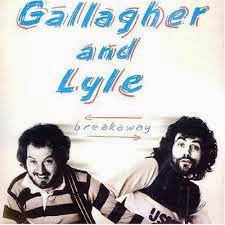 Gallagher and Lyle  sadly weren't a side project of golfers Bernard and Sandy.
No, rather they are the Scottish duo of  Benny Gallagher and Graham Lyle.
Former members of McGuinness Flint they were the writers of the hit single When I'm Dead and Gone.
From 1976 Breakaway was their fifth album and the one which brought them to national prominence.
It reached number 6 on the UK album charts and they had the dubious honour of Art Garfunkel covering the title track.
They split in 1980 and both enjoyed considerable success playing and writing for a myriad of other artists.
Somewhat inevitably they had the obligatory reunion in 2010.

Gallagher and Lyle - I Wanna Stay With You

Gallagher and Lyle - Heart on my Sleeve
Posted by Charity Chic at 08:00