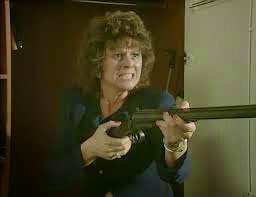 The country singer Jack Ingram sometimes goes by the moniker of Country Jack Ingram.
Around the same time as his 1997 album Livin' of Dyin' was out in the British soap opera Coronation Street one of the lead roles Mike Baldwin had a new love interest Jackie Ingram As you can see from the above picture it all ended in tears.
The less mature among us ( you know who you are George) took to referring to her as Cowboy Jackie Ingram.
I saw Jack (as opposed to Jackie ) at King Tuts and he was rather good.
For those of you who can perhaps detect a little bit of Steve Earle in his music it will come as no surprise to learn that the album was produces by the Twang Trust - namely Ray Kennedy (not the former Liverpool footballer) and the afore mentioned Mr Earle

Jack Ingram - She Does Her Best