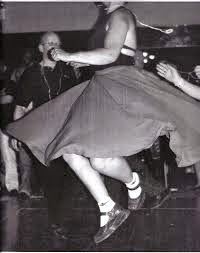 It's time for disc 2 from the 6 disc Talcum Soul series of Northern Soul tunes.
The first one was well received with a lot of love in particular for She Blew a Good Thing  by The Poets.
It was groups the last time out but this time round it is the turn of the ladies.
Patrice Holloway sadly is no longer with us having died in 2006 from a heart attack at the age of 55.
Ecstasy is one of the singles she recorded on Capitol Records in the mid 60s. Seemingly, she is best remembered as the voice of Valerie in the Hanna-Barbara TV series Josie and the Pussycats.
Timi Yuro enjoyed a longer and more successful career being considered as one of the first blue eyed soul singers of the rock era and often being referred to as the little girl with the big voice.She died aged 63 in 2004.
More Talcum Soul next Sunday.

Timi Yuro -It'll Never Be Over For Me
Posted by Charity Chic at 08:00