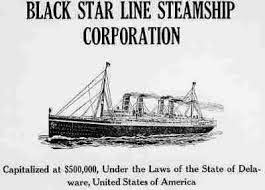 On the recently featured Mojo Rebel Music CD there is a track by Tapper Zukie extolling the virtues of the MPLA - the Popular Movement for the Liberation of Angola or in the Portuguese Movimento Popular de Libertação de Angola
A reference in the song is made to Black Star Liner.

Black Star Liner is also the name of a band from Leeds who played Asian influenced dance music and dub reggae.
Recently I picked up a cheap copy of one of their singles Rock Freak from 1997. The title track is a load of pants but the other songs on the single are not too bad