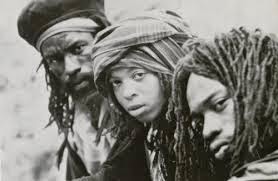 It's reggae week on the Saturday Lucky Dip slot courtesy of Sun is Shining - 15 Reggae Summer Scorchers a Mojo compilation from July 2007
It features a "rare"Bob Marley track with a live recording of Exodus from the obligatory 30th Anniversary deluxe edition of the album of the same name. One imagines that the accompanying magazine had an overlong feature about Mr Marley and the recording of this album.
We are going for two songs from different ends of the reggae spectrum.
From the more poppy and commercial end we start with What is Life by the great Black Uhuru (Uhuru being Swahili for Freedom)Taken from the album Anthem which won a Grammy for Best Reggae Recording in 1985.
I suspect that Prince Far I has never appeared before the Grammy judges.Mores the pity as I'm sure they would have been blown away by the fantastic Black Man Land.

Black Uhuru - What Is Life