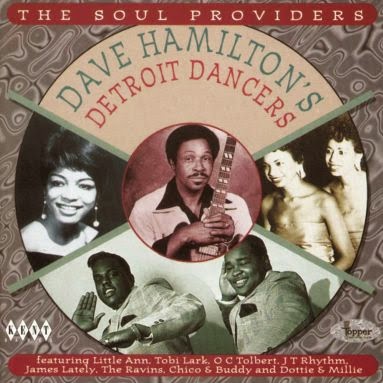 Dave Hamilton's Detroit Dancers is the first in a series called The Soul Providers dedicated to producers, arrangers, writers and musicians who have moulded the shape of Soul music while the artist stole the headlines.
Dave Hamilton, the man in the middle of the album cover was a Detroit session guitarist who contributed to all the tunes on this album including a few of his own.This blurb from Ace Records gives some more details about the man and the record.
I had never heard of him or any of the artists features and I suspect I bought this primarily because it was on the Kent label which is almost always a cast iron guarantee of quality.
Little Ann and Tobi Lark made the short list and will feature at a later date.
However, I have gone for the fantastically named  OC Tolbert and Gil Billingsley with two terrific songs.

Not to be confused with Diddy David Hamilton who is a diddy.

OC Tolbert - I'm Shooting High (I Reach For The Sky)

Gil Billingsley - That's All She Wrote
Posted by Charity Chic at 08:00