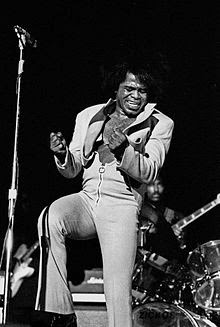 Today we feature The Godfather of Soul and The Hardest Working Man in Show Business Mr James Brown.
Not a particularly pleasant individual with a history of domestic violence and drug abuse with a prison service for drugs and weapons offences.
He was however an extremely hard worker being in the business for six decades often performing upwards of 330 shows per year with the James Brown Review.
He was also a hard taskmaster demanding discipline, perfection and precision from his musicians and dancers. He often fined members of his entourage for alleged misdemeanours . In other words the musical equivalent of Jim McLean
I turned down an opportunity to see him at the Glasgow Academy shortly before his death something which in hindsight I probably regret.
To me his music seems to be pretty much variations on a theme albeit a theme that you can't help but strut your funky stuff to.