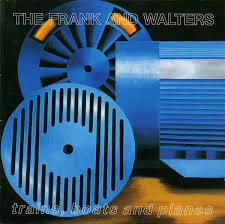 Trains,Boats and Planes could very well be the title of a new series (and it may well be some day). It is also the title of a 1992 debut album by Cork band The Frank and Walters on Setanta/ Go Discs. The bulk of the production is from Edwyn Collins with Ian Broudie also getting in on the act.

My favourite track from the album is Happy Busman which featured here fairly recently as part of my Happy Hippy Chick Mix mini-series.

Therefore I've gone for Fashion Crisis Hits New York a track that I had as a single prior to picking up the album. Also attached is After All which you may recognise given that it reached number 11 in the UK Singles charts. You can definitely hear the Broudie influence on this one.

As the band may say what a hippy dippy crazy world.

The Frank and Walters -After All

The Frank and Walters -Elegant Chaos