The Train Wreck is Behind You 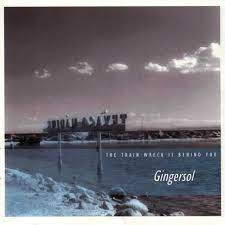 When I replaced New Miserable Experience by the Gin Blossoms back on the Americana shelves after last week's post I noticed that the 2001 album The Train Wreck is Behind You  by the band Gingersol  on Idea Prone Recordings was adjascent to it. Is it was a while since I had listened to it (probably as far back as July 2016 ) I felt it was  due an airing.
Coincidentally Gin Blossoms get a mention on thr blurb on Spotify (lifted from All Music) which states Los Angeles band Gingersol plays delightfully melodic, rough-edged rock that recalls the Replacements, early Wilco, or a more scruffy Gin Blossoms -- but with their own, distinct sonic stamp.

Not to be confused with Gingerol ( properly as [6]-gingerol, is a phenol phytochemical compound found in fresh ginger that activates spice receptors on the tongue.)

Gingersol -Where Do I Stand?