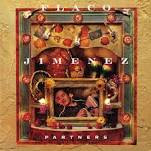 I feel that it's time for a little bit of Flaco.

From San Antonio and a member of the Texas Tornados and Los Super Seven ladies and gentlemen I give you Leanardo "Flaco" Jiminez the legandary conjunto accordionist still going strong at 82 years young.

From 1992  on the Repise label  Partners sees a host of legends line up to pay homage and duet with the master. The likes of Emmylou Harris, Linda Rondstadt and Ry Cooder have previously features with their tracks from this album.

I think it is first time around for John Haitt who joins Flaco for a rendition of Across the Borderline a song he wrote with Ry Cooder and Jim Dickinson.

Dwight Yoakam's interpretation of Warren Zeron's Carmelita has appeared before. I make no apologies for that. It will almost certainly make further appearances on these pages such is its brilliance. The definitive version.