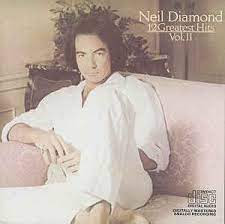 It's the end of an era as we feature the last Val's Vinyl post. If my calculations are correct this is the 25th post.

We started on the 1st of November 2020 with Sweet Caroline by Neil Diamond. It is only proper that now just over  6 months later we finish with Neil Diamond with his 12 Greatest Hits Vol 2 a 1974 compilation on the MCA label.

There are some sadly which have not quite made the grade. Portrait by The Nolans for instance. We have already had Making Waves and you can have too much of a good thing. I've decided to spare you Nature Boy  a single by George Benson as I have already featured an album  and I  couldn't bring myself to subjecting you to him again.

There are a further two Neil Diamond albums Rainbow ( a pretty dire covers album) and Serenade.See my comment about the Nolans above. Finally I'm not featuring Off the Wall by Michael Jackson for obvious reasons.

I reckon I'll probably keep about a third of the records and donate the rest to charity. It's what Val would have wanted. For the record Mrs CC likes Neil Diamond so this one is likely to be a keeper.

There is now a rather large Sunday void requiring to be filled.

Neil Diamond - Love on the Rocks