Found Out About You 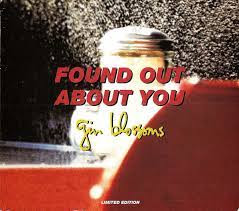 The 1992 album New Miserable Experience by Tempe, Arizona power pop band Gin Blossoms found it's way into the CD player over the weekend.

This in turn led me to looking out the CD single of Found Out About You which features on the album and had also appeared on their 1989 debut Dusted.

It was written by their guitarist Doug Hopkins and is based on a compilation of episodes with several of his girlfriends. Sadly Hopkins had personal issues and alcoholism which led him tp be fired by the band. Even more sadly this led to a downwards spiral with him completing suicide in December 1993 around the time this came out as a single.

I have two versions of the single and have selected the one which contains live versions of their other big song Hey Jealousy (also written by Hopkins) and another couple from the album.

Gin Blossoms - Found Out About You

Gin Blossoms - Hold Me Down (live)