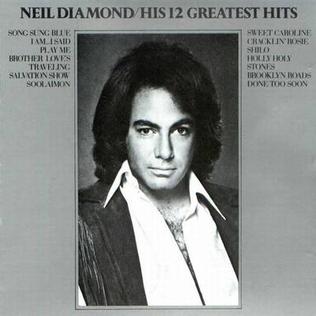 It occurred to me after submitting the last piece that some of you might have the impression that the box pictured last week was filled with cds. It is not. I think it’s about a quarter full, at most. Anyway, I stuck my arm in and the next thing out was a Neil Diamond album.  That’s his real name too. The album is Neil Diamond His 12 Greatest Hits. They could well be, as that dire dirge Love On The Rocks is absent, and that inane Forever in Blue Jeans. So I’ll whip  it out and give it a play,

I’ve almost thrown it out after the first 10 seconds. It’s a live recording, and there’s no indication about this on any of the notes. I feel conned. Then again, I didn’t buy it. I feel conned on behalf of the person who did buy it for €6.93.. And now track 3 is sticking, and despite some vigorous rubbing It won’t stop, so you’re not getting Shilo (the few seconds I heard were not promising) I do like this, though

As for the remaining tracks, I wonder if the studio recordings (most tracks) are of lesser known tracks, and  I’m sure this is a re-recording, but it’s very well done:

Not a keeper. But I found out that it is perfectly decent listening for hanging out the cuecas to.*

The next one is also not a keeper, but that’s because I have most if not all the tracks already. It’s called The Best Of New Wave, and is a 2cd set. 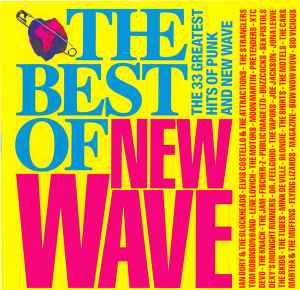 More than a plethora of very well-known tracks. This is one that really stood out for me, it sounds absolutely tremendous still, 42 or 43 years after being recorded, great music and production:

And there’s this, which is new to me:

And a whole host of other great tracks amongst the 33. (Of course that does not include the Jam song).  Actually, maybe a keeper, for the car.

The Fischer Z song  is NOT a cover version of this:

*My ignorance is for you all to see; you can find out the actualité at wiki, here.

Val had volume 2 of that Neil Diamond compilation where Love on the Rocks appears!