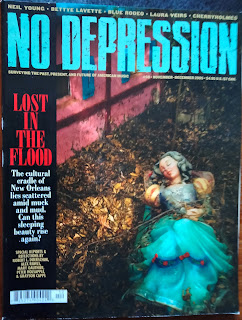 #60 -   November - December  2005
The cultural cradle of New Orleans lies scattered amid muck and mud. Can this sleeping beauty rise again?
Something different this edition. Rather than the usual artist and new album as the main article this edition concentrates on the impact of Hurricane Katrina on New Orleans. A category 5 hurricane towards the end of  August 2005 which led to over 1800 casualties and wide spread flooding.
There are a series of articles on waiting,watching and wondering what the future holds for the city. Glitter and Glue by Robert L.Doerschuk looks at the everyday players who bind New Orleans music together who all have their own ways of dealing with hard times in the Big Easy.
In the Battle of New Orleans Alex Rawls writes that how the Crescent City is rebuilt will determine the fate of its multicultural personality ( and we all saw how in impacted most heavily on the poorer black communities).
New Orleans born musician Mary Gauthier now lives in Nashville but was in Hawaii when the hurricane struck. She gives a personal perspective  worrying about her father who was in a nursing home in the areas. His home was unaffected but in one less than 60 miles away 34 residents drowned with a further 17 fatalities in another nursing home.There are a further two shorter articles by musicians Peter Holsapple and Grayson Capps.
I've selected some songs about New Orleans below.
For the One from the Top I've gone for the great Bettye Lavette  with her version of What Condition My Condition is In from the great 2004 Trikont compilation  Dirty Laundry - the Soul of Black Country.
Two more to go.
Mudflat Walkers - New Orleans
Dr John - New Orleans
Fats Domino - Walking to New Orleans
Redbone -The Witch Queen of New Orleans
Bettye LaVette - What Condition My Condition Is In
Posted by Charity Chic at 08:00