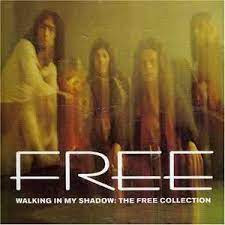 2022 Charity Shop Purchases 27 - Free -Walking in My Shadows-  The Free Collection
Some more Bluesy Rock this week for the final "Classic Rock" purchase picked up in Sue Ryder in Newton Stewart.
Free were a band from London who were on the go from 1968- 1973 consisting for the most part of that period of Paul Rodgers on lead vocals and keyboards, Paul Kossof on guitar, Andy Fraser on bass and Simon Kirke on drums.They released 6  studio albums and one live album during this period, When they broke up Rodgers and Kirke went on to form Bad Company.
Walking in My Shadows is a double CD in one of those old fashioned cases which take up about the space of 3 CDs on your shelves. Such things can determine whether it is a keeper of not (the jury is currently out). Released in 2007 by Spectrum, who seem to specialise in this sort of thing, it contains 34 tracks with all the ones that you will be familiar with.
After a slow start they struck gold with All Right Now leading to an appearance at the 1970 Isle of Wight Festival and super stardom thereafter. All Right Now was their only singles hit in the States.They did considerably better in the UK charting 7 times including an All Right Now remix.
Here are their top ten hits (peaking at 2,4 and 7) in the order that they were released
Free - All Right Now (Single Version)
Free - My Brother Jake
Free -Wishing Well
Posted by Charity Chic at 08:00