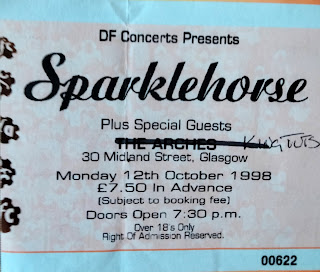 As you can see from the ticket this show had been moved from The Arches to King Tuts. I'm not sure wither this represented an upgrade or downgrade. The latter I suspect although the Arches had a variety of areas of differing size where shows could be held.

I  went to see this one on the back of the album Good Morning Spider which had been released at the end of July 1998 and is the only thing of theirs that I have.* My cataloguing has now reached S which sort of prompted me to feature this at this stage of proceedings.

I went to this one with an American student called Stacey who we had met at a Victoria Williams concert which was also at Tuts. I can't find the ticket for that one so it will not feature in this series.

Sparklehorse was the band of singer and multi- instrumentalist Mark Linkous. In 1996 he suffered a near fatal overdose passing out with his legs pinned beneath him which cut off the circulation.iit was over 14 hours before he was discovered and the resulting potassium build up caused his heart to stop for several minutes.The resulting surgery led to him being confined to a wheelchair for several months.

His music has been described as exporing themes of frustration,resignation,wonder and gratitude. Throw in some distortion  and static and electronic squiggly bits and it can be a hard listen but its worth it. There is certainly an Americana feel to his singing which obviously is no bad thing with obvious comparisons to the likes of Mercury Rev and Grandaddy

From memory it was loud but I enjoyed it

*I've just discovered that I also have a copy of  their 2001  follow up album It's a Wonderful Life which I was totally unaware that I had. It seems that I picked it up from a local Charity Shop.I'm off to listen to it now

Sparklehorse -Box of Stars (Part One)