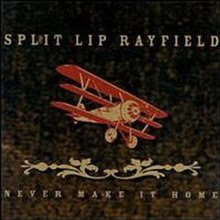 Other than a post marking their demise it has been a wee while since I have played anything from Bloodshot Records.
It is even longer since I have played anything by Wichita, Kansas band Split Lip Rayfield -10th September 2013 to be precise as part of my Bloodshot Tuesday series one of the first series on this blog
Never Make it Home (Bloodshot BS 068) from February 2001 is their third album but the only one of theirs on the shelves.There is a bluegrass base to their music but it is none of that stuffy and earnest bluegrass that you often hear. They are (fortunately) no Alison Krauss and Union Station or Nickel Creek

The band consisted of Kirk Rundstrom (Guitar and vocals), Wayne Gottstine (Mandolin and vocals),Eric Mardis (banjo and vocals) and Jeff Eaton (Gas Tank Bass, vocals and crucially Kazoo) The name was inspired by a person who went to school with Eaton's parents who acquired the nickname Split Lit due to constant chapped lips

Sadly Kirk Rundstrom died following esophagael cancer in February 2007. The band continued but have only released two further records in 2008 and 2017