Keeping Up With the Joneses -Rickie Lee 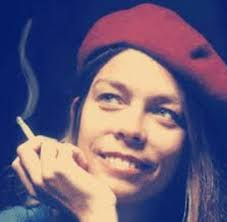 Despite having released well over a dozen albums since 1979 Rickie Lee Jones is probably considered by many as something of a one hit wonder. That hir being Chuck E's in Love  a song about fellow musician Chuck E Weiss who at the time was staying in the Tropicana Hotel in Los Angeles alongside Rickie and her then beau Tom Waits.
When I say a  hit  it only reached number 18 in the UK singles charts where it hung about  for 9 weeks after entering on 23rd June. Nevertheless it pops up frequently on the radio and most of you will be familiar with it .

Not at the time, but I subsequently got a CD copy of her 1999 self-titled debut album on which it appears. I have never knowingly heard anything else by her. This maybe something that I should regret given that the follow up album 1991's Pirates was listed as number 49 on NPR's Greatest Albums Made by Women and also the fact that she is a two time Grammy winner who was listed at number 30 on VH1'S 100 Greatest Women in Rock'n' Roll in 1999. If you look hard enough you can find lists on just about anything.

Until thn here is the ubiquitous Chuck E's in Love and the two follow up singles form the album: Young Blood which reached nuber 40 in the US and Danny's All-Star Joint which didn't chart anywhere.