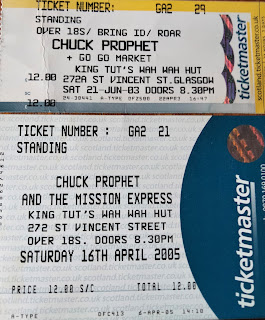 My ticket tin tells me that I have seen Chuck Prophet twice at King Tuts, thrice if you include Green on Red. I think that I have seen him there more often as he regularly appeared in Glasgow and was one of those artists that you would always go and see.

On one occasion I witnessed him getting an electric shock as the guitar wires touched the mic. If he thought he was going to get any sympathy from a Glasgow audience he was in for a shock (do you see what I did there?) as they were too busy slagging off his shirt.

I've also seen him in Austin as guitarist to Alejandro Escovedo in a couple of blistering concerns at the Continental Club a venue held by many in the same regard as Tuts.

I saw him more recently at Cottiers. When I say recently I've just checked and it was actually September 2018. That still seems recent to me. He was pretty disappointing and was blown away be support act Jesse Malin.

Chuck Prophet - Til You Came Along

Chuck Prophet - Pin a Rose on Me