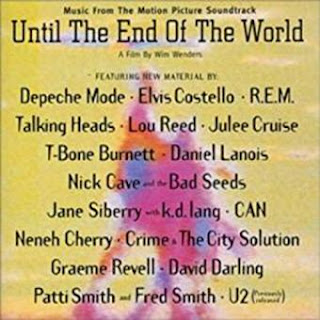 The second collection given to me was by a teacher friend who took a year long sabbatical and asked me to look after his records. Charity Chic was down for a visit a few weeks after, and together we investigated and probably alphabetised the 7-inch singles. Of course, it was accompanied by comments/exclamations along the lines of “got it”, “had but lost/sold” and “wah hey”, the latter when an especially good or memorable single was found, like “Seasons in The Sun”. And CC also came out with one of his belting phrases “this is the most fun I’ve had while keeping my clothes on”. One of his other personally memorable phrases was a warning to me, given 16 years ago, and I am glad to say I have heeded that advice and thus not suffered from the physical violence with which I was, quite rightly, threatened.

If you want to hear a really terrible Nick Cave song, listen to “Till the end of the World”, track 11 on the album “Until the End of the World: Music from the Motion Picture Soundtrack”  Note to Mr Cave, I think you mean ‘til as in until, not till as in cash register or tend the land. There’s a song by that irish band too. And such is my dedication to listening to  every track on the albums in this collection, I did listen to it all. It’s not the worst track on the album, it is actually perfectly listenable. The entire track listing can be seen here.

Some  decent songs, but most not to my taste (the Irish band’s song is one of the better ones on the album), so it’s another bird-scarer. I almost selected the track by german avant garde band Can, but it’s a bit dull, and I prefer these two:

I typed “until the end” on startpages, and autocomplete suggested Until The End Of Time by Justin Timberlake and Beyoncé. So, I played it. Complete nonsense, and also, sadly, no discernible Pussycat influence 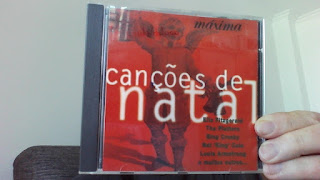 It’s Star Wars Day as I write this, a lovely day, white fluffy cotton-wool clouds in the sky, the sparrows are chirping away, the goats are chewing their cud, dogs barking.  And  an album of Christmas songs to listen to, the next album selected. It is, I think, going to be a challenge to (a) listen to all the way through, and (b) pick a decent song from. It’s not exactly one for listening to in May, it’s Canções de natal. You know that song “When a Child is Born”?  You do, you remember Johnny Matthis singing it! Well someone called Brook Benton absolutely bloody murders it, what an ordeal it was to hear that ordure all the way through. Followed by Rosemary Clooney singing Jingle Bells. The Drifters are credited with a few songs here, but it’s not the Clyde McPhatter version, nor the early 1960s Ben E King version, and not the 1970s “Sitting in the back row of the movies” version.  The album sounds like, maybe, Des O’Connor singing the songs,  backed up by a studio orchestra. You know the thing, a 1970s Saturday night TV entertainment show, and the host says something like “and now time for a song”,  I have to say, though, that Bing Crosby does have a lovely velvety voice:

What's the difference between Bing Crosby and Walt Disney? Bing sings! (and Walt disnae……) I wish I’d put that joke in my thesis .But when the next song, after Bing,  came up, I just couldn’t help singing along, and nodding my head in time to the tune.. It is entirely possible I was on the threshold of hysteria or a major breakdown

The last 6 songs pass me by, I’m in some sort of daze or stupor, they leave no imprint.

The label responsible for this is on the Rua Vitor Gordon, which is near Cais de Sodre (in Lisbon) where you can sit with a picnic by the river and get fed up with the constant “hashish-cocaine” sellers pestering you every two bloody minutes. You could  then nip along and ask them (the label people not the “hashish-cocaine” people) why they think Auld Lang Syne is a christmas song.

CC writes: I've never followed through on a threat of physical violence but had you posted Justin Timberlake and Beyoncé.....