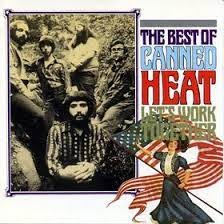 Maybe this should more properly read " Classic Blues Rock" . I'm only really familiar with the songs below and am slowly working through the 20 tracks . I've yet to pluck up the courage to listen to the last track - The Chipmunk Song by The Chipmunks with Canned Heat. I suspect that it may be last for a reason.

The band formed in Los Angeles in 1965 and remarkably a version of the band is still on the go  with drummer  Adolfo "Fito" de la Parra the only member from the original line up. The vast majority of the tracks are taken from their first five albums released on Liberty Records between 1966 and 1970

They performed Blues standards alongside their own material.Their two most famous songs are re-hashes of early Blues numbers.Going Up the Country is a remake of the Henry Thomas song Bull Doze Blues first recorded in Louisville, Kentucky in 1927. On the Road Again is a remake of the 1953 Floyd Jones song of the same name which in turn is reportedly based on the Tommy Johnson song Big Road Blues recorded in 1928. An American version of Led Zeppelin then!

At the moment I'm leaning down the keeper road.

Canned Heat - On The Road Again

Canned Heat - Going Up the Country