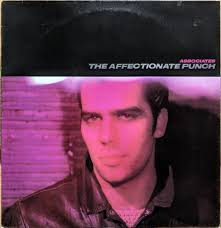 Along with a myriad of bookshops in Wigtown there is a vintage and retro curiosity shop called the Wigtown Emporium
As well as all the knick knacks they sell second hand CDs and Vinyl. It is a wee bit overpriced but when the owner said he would be willing to give me a discount I picked out a couple of records.

One was The Affectionate Punch by the Associates. If you don't recognise the cover above that is because it is the 1982 remix and reissue on their new label Warner Brothers. It retained the old tracks, albeit in a different order, but was given some 80's production with some new synths and  some re-recorded vocals by Billy Mackenzie. Both Billy and Alan Rankine expressed dissatisfaction with the results and you can maybe see why. It is of its time but one  that I would argue  is still worth having.

It joins Fourth Door Down and Sulk on the shelves.

Associates - A Matter of Gender