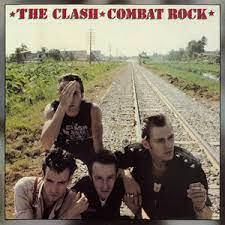 2022 Charity Shop Purchases 25 - The Clash - Combat Rock
Combat Rock the fifth and the last worth having album by the Clash turned 40 on Saturday.
As is the way of these things a 40th anniversary issue called Combat Rock/The People's Hall is scheduled for release on Friday
It contains an additional 12 tracks with the two collaborations with the late Ranking Roger the most interesting.
Again as is the way of these things a vinyl copy of the album will cost you in the region of £45 to £50 quid. That is a bit too steep for me. I did, however, somewhat coincidentally last Friday fork out a quid in a charity shop for a CD copy of the album to accompany the vinyl copy which I got when it was released.
You will all be aware of the three big singles  from the album but the other nine tracks are also pretty damn good. Here are a couple of them.
The Clash - Car Jamming
The Clash - Ghetto Defendant
Posted by Charity Chic at 08:00