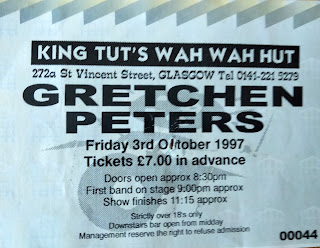 The late 90's/eary 00's were probably about the time when I was almost exclusively fixated with Americana music. I can't remember how Gretchen Peters crossed my radar but I wouldn't be surprised if it was on the back of her cover of Steve Earle's I Ain't Ever Satisfied which I probably would have first heard on the Andy Kershaw show.

There were a few young female Americana singers around at this time - Gretchen, Stacey Earle, Maria McKee and Michelle Shocked spring to mind.

The only Gretchen Peters album I have is her 1996 debut album The Secret of Life which was released  in June 1996 and which would have formed the basis of her show given that it was all she had released by that date and her next was not released until 2001. I actually think that the copy of the album didn't appear on the shelves until some years later so with the exception of the Steve Earle cover I was going in cold.

Surprisingly what I consider to be her best tune, the one by which she is probably best known On a Bus to St Cloud was not one of the singles from the album. I Ain't Ever Satisifed and When You're Old had that accolade.

I next saw her in 2014 at the Mitchell Theatre as part of  that year's Celtic Connections by which time her music was even more mainstream. She did however play the first two of the following tracks from  the first album at that show too

Gretchen Peters - I Ain't Ever Satisfied

Gretchen Peters - On a Bus to St Cloud