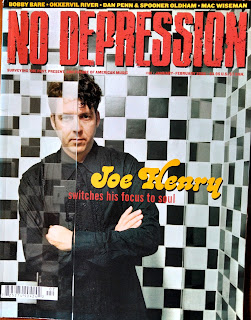 #61 -  January - February 2006
We move into 2006 this week with the cover star being Joe Henry. He is not someone that I know that much about. I am aware that he has recorded and released stuff with Billy Bragg and that he is a producer. I was not aware, however, that he had released well over a dozen solo albums in the 20 year period between 1999 and 2019. I couldn't name one of them and don't recall knowingly having ever heard any of his solo stuff (this is usually a cue for Ernie Goggins to chastise me and to fire over some music to enhance my musical education).
As I said I was aware he was a producer and on the cover it says that he switches his focus to soul. Fortunately I have a couple of the albums that he lends his hand to so my blushes are slightly spared.
One such album is I've Got My Own Hell to Raise by the legend that is Bettye La Vette released on ANTI- in September 2005 which features prominently in the lead article. In the spirit of Alt Country I am including Bettye's terrific cover of Joy by Lucinda Williams.
Solomon Burke is also mentioned in dispatches. Joe produced his 2002 album Don't Give Up on Me on the great Fat Possum label and here Solomon covers Flesh and Blood  a song written by Joe.
I was intrigued by his work with Billy Bragg which I was vaguely aware of  and discovered a cover of Gentle on My Mind taken from 2016's  Shine a Light: Field Recordings from the Great American Railroad
For this weeks One from the Top I'm keeping the country/soul theme going with the great Dan Penn and Spooner Oldham and a song from their brilliant live album 1999's Moments From this Theatre on the Proper label.
The final instalment of this series, which seems to have been going on for ever, next week.
Bettye LaVette - Joy
Solomon Burke - Flesh and Blood
Billy Bragg and Joe Henry - Gentle on My Mind
Dan Penn and Spooner oldham - Out Left Field
Posted by Charity Chic at 08:00